'Miracle' baby born in tree during Mozambique floods to turn 17 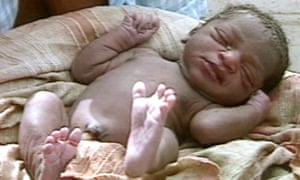 Rosita sleeps after being winched to safety. Photograph: Reuters TV


Rosita Mabuiango’s birth in a tree above swirling waters 17 years ago thrust her into instant stardom, drawing global attention to the worst floods to hit Mozambique in recent memory.

The images of Rosita draped in dirty linen, moments after she and her mother were winched to safety by a helicopter, touched the world, helping raise funds for tens of thousands of flood survivors.

But these days, the teenager does not consider herself special. “I’m normal, it’s just a different way of being born,” she said.

Rosita was born on 1 March 2000, four days after her marooned mother clambered into a tree to escape deadly floods ripping through southern Mozambique. 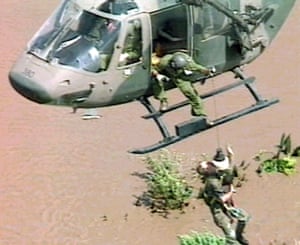 “I think it’s God who chose that I be born that way,” Rosita said while sitting in her godmother’s house in the capital, Maputo.

Torrential floods had forced the heavily pregnant Carolina Chirindza and other family members into a tree with no food or water. While clinging to its branches, Chirindza, previously named in the media as Sofia Pedro, went into labour.

Her mother-in-law held a capulana (a long sarong) under her to catch the baby and prevent it from falling into the crocodile-infested waters. The baby was named Rosita after her grandmother. 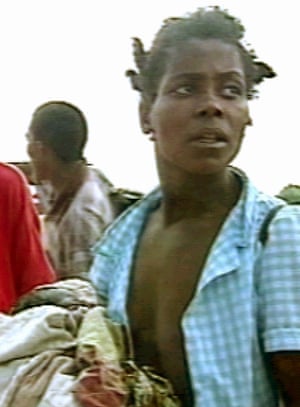 “I was not prepared for this, but that’s what God wanted,” Chirindza, 39, said while sitting outside her house in Chibuto, a city 175 miles north-east of Maputo.


A journalist witnessed her and the newly born baby being lifted away by a South African defence forces helicopter after the birth.

After landing on dry ground, the exhausted mother cradled her daughter in drenched linen.

As Rosita approaches her 17th birthday, her mother said their survival was a “miracle for sure”.

“Yes it changed my life, because now I have a house, I also have a job,” said Chirindza, speaking outside a three-bedroom house donated to the family by the local municipality.

She was also given a job as cleaner by the district administrator, lifting her out of poverty.

Four and a half months after she was born, Rosita and her mother travelled to Washington to lobby the US Congress for expanded aid to help tens of thousands of Mozambicans affected by the catastrophe.

Rosita’s treetop birth helped cast the spotlight on an impoverished country overwhelmed by floods. Nearly 800 people died in the disaster.

She became a rallying point for securing millions of dollars in international aid, to help those affected and to improve flood protection schemes that have prevented a repeat of the huge death toll.

A plaque has been erected on the mafureira (natal mahogany tree) where she was born. 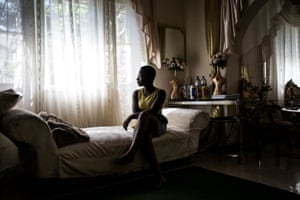 But Rosita is relieved the public attention has faded and that she enjoys a normal life, focusing on her schoolwork.

She wants to study petrochemical engineering, a strategic career choice with the recent discovery of gas reserves off the coast of Mozambique.

When not studying, she plays football at her Catholic school and for local junior clubs.

… we’ve got a small favour to ask. More people are reading the Guardian than ever, but far fewer are paying for it. Advertising revenues across the media are falling fast. And unlike some other news organisations, we haven’t put up a paywall – we want to keep our journalism open to all. So you can see why we need to ask for your help. The Guardian’s independent, investigative journalism takes a lot of time, money and hard work to produce. But we do it because we believe our perspective matters – because it might well be your perspective, too.

If everyone who reads our reporting, who likes it, helps to support it, our future would be much more secure.
Become a Supporter
Make a contribution