Mozambique's National Elections Commission (CNE) on 30 October announced that former defence minister Filipe Nyusi, the candidate of the ruling Frelimo Party, has won the presidential election held on 15 October with 57% of the vote.
In second position was Renamo leader Afonso Dhlakama with 36.6%, while the third candidate Daviz Simango, the mayor of Beira and leader of Mozambique Democratic Movement (MDM), took 6.4%.
In the parliamentary election, Frelimo won a comfortable majority and will hold 144 seats in the new parliament to 89 for Renamo and 17 for MDM. The results were as follows:
Presidential election
Number of registered voters 10,964,978
Number who voted 5,333,665
Turnout 48.64%
Number of valid votes 4,871,804 (91.34%)
Blank ballots 290,186 (5.44%)
Invalid votes 171,675 (3.21%)
Candidates
Filipe Nyusi 2,778,497 (57.03%)
Afonso Dhlakama 1,783,382 (36.61%)
Daviz Simango 309,925 (6.36%)
Parliamentary election
Number who voted 5,316,936
Turnout 48.49%
Valid votes 4,508,142 (84.79%)
Blank ballots 458,919 (8.63%)
Invalid votes 252,535 (4.75%)
Parties
Frelimo 2,575,995 (55.97%)
Renamo 1,495,137 (32.49%)
MDM 384,538 (8.36%)
The remaining 3.18% of the parliamentary vote was scattered around no less than 26 minor parties, none of whom obtained even half a per cent.
The 250 parliamentary seats are allocated as follows:
Niassa
13 seats - Frelimo 7, Renamo 6, MDM 1
Cabo Delgado
22 seats - Frelimo 19, Renamo 3, MDM 0
Nampula
47 seats - Frelimo 22, Renamo 22, MDM 3
Zambezia
45 seats - Frelimo 18, Renamo 22, MDM 5
Tete
22 seats - Frelimo 11, Renamo 10, MDM 1
Manica
16 seats - Frelimo 8, Renamo 8, MDM 0
Sofala
22 seats - Frelimo 8, Renamo 10, MDM 3
Inhambane
14 seats - Frelimo 12, Renamo 2, MDM 0
Gaza
14 seats - Frelimo 14, Renamo 0, MDM 0
Maputo province
17 seats - Frelimo 12, Renamo 3, MDM 2
Maputo City
15 seats - Frelimo 11, Renamo 3, MDM 2
In addition, there are two seats for Mozambican communities abroad, one for Africa, and one for the rest of the world. Frelimo won both these seats.
While Frelimo has won a comfortable victory, it is far cry from the 75% of the vote it took in the previous elections in 2009. Frelimo has lost its two thirds majority in parliament, and so cannot pass amendments to the constitution on its own.
Questioned by reporters, the Frelimo national election agent, Veronica Macamo, made light of Frelimo's loss of 47 parliamentary seats. She said that, even when it had a two thirds majority, Frelimo always tried to work with the opposition benches and to pass legislation, whenever possible, by consensus.
Renamo ought to be pleased with the results. Dhlakama's share of the vote has more than doubled in comparison with the 2009 election, and Renamo's parliamentary representation is set to rise from 51 to 89. MDM's parliamentary group will double in size, from eight to 17.
Nonetheless, both opposition parties have rejected the results, and their election agents did not attend the announcement.
Renamo had submitted a formal appeal against the results earlier in the day
The CNE's results are broadly in line with the results announced by the 11 provincial elections commission. The main change is that the number of invalid votes has been greatly reduced. The CNE looked at every vote declared invalid at the polling stations. There were about three quarters of a million of these, and the CNE managed to rescue 174,614 of them (23%), which were then distributed among the parties for whom they were intended.
The changes, in comparison with the distribution of seats based on the provincial results prior to reclassification of the invalid votes, are that in Cabo Delgado Frelimo gains two seats, and MDM and Renamo each lose one, and in Nampula Renamo gains a seat at the expense of MDM.
CNE chairperson Abdul Carimo said that some members of the CNE had voted against the resolution containing the results - but he did not say how many. However, AIM learnt from another CNE member that seven out of the 17 CNE members voted against, mostly members appointed by Renamo and MDM. At the end, however, all members of the CNE signed the minutes of the meeting - though some of them, such as Renamo appointees Latino Ligonha and Fernando Mazanga, added riders describing the results as "fraudulent" or "not transparent".
Carimo admitted that although the elections had, in general, been "orderly, calm and tranquil", they had been marred by "administrative irregularities, electoral offences and common crimes". The CNE knew about these because they had been denounced, not by the competing parties, but by election observers and the media.
Despite the later Renamo and MDM claims of generalised fraud, Carimo said the CNE had not received a single complaint from any political party until the Renamo appeal. Nonetheless, the CNE had launched investigations into the cases reported in the press, and this investigation "is still under way, with the involvement of the relevant bodies of the administration of justice".
He hoped that a detailed report could be obtained on each of the cases so that the CNE could provide an explanation to the public about such matters as the late opening of polling stations, allegations of ballot box stuffing and the deliberate invalidation of votes by members of polling station staff.
The results announced by the CNE are not final. They still have to be validated and proclaimed by the Constitutional Council, the country's highest body in matters of constitutional and electoral law. The Council will also have to rule on any Renamo and MDM appeals.
Posted by Moçambique Terra Queimada à(s) sexta-feira, outubro 31, 2014 Sem comentários: 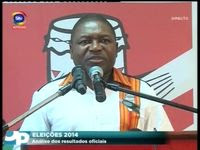