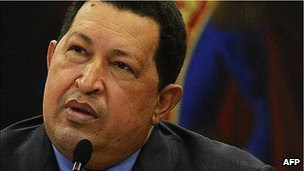 President Chavez, 58 is due to be sworn in for his new term on 10 January
Continue reading the main story

Venezuelan President Hugo Chavez has suffered "new complications" after a cancer operation in Cuba, his vice-president has said.
In a televised address from Cuba, Nicolas Maduro said Mr Chavez continued to be in a "delicate state".
Mr Chavez underwent his fourth cancer operation on 11 December in Cuba but suffered a respiratory infection.
The president - who has been in power since 1999 - won another term in October's election.
Mr Maduro did not give details about Mr Chavez's condition but said the latest complications were connected to the respiratory infection.
"We have been informed of new complications that arose as a consequence of the respiratory infection we already knew about," he said.
"The president gave us precise instructions so that, after finishing the visit, we would tell the (Venezuelan) people about his current health condition.
"The state of health of President Chavez continues to be delicate."
He added that the treatment was "not without risk." 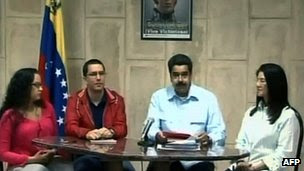 Nicolas Maduro, second right, made the televised address from Havana
Mr Maduro, appearing solemn, spoke alongside Mr Chavez's eldest daughter, Rosa, his son-in-law Jorge Arreaza, and Venezuelan Attorney General Cilia Flores.
The vice-president said he would remain in Havana "for the coming hours" but did not specify how long.
Late on Sunday, Venezuela's Information Minister Ernesto Villegas said a government-organised New Year's Eve concert in central Caracas had been cancelled and he urged Venezuelans to pray for President Chavez.
The BBC's Sarah Rainsford in Havana says it is now three weeks since Hugo Chavez has been seen or heard from in person.
There continues to be huge secrecy surrounding his precise condition, she says.
There are also many questions about what will happen on 10 January when Mr Chavez is due to be re-inaugurated, our correspondent adds.
National Assembly head Diosdado Cabello recently said that the swearing-in ceremony would be delayed in the case of Mr Chavez's absence.
However, opposition leaders say postponing the inauguration would be unconstitutional.
The constitution states that if there is an "absolute absence" of the president, elections must be held within 30 days.
Mr Chavez has said that, should his health fail, Venezuelans should vote for Mr Maduro in fresh elections.
Officials have never disclosed the type or severity of Mr Chavez's cancer, which was first diagnosed in June 2011.

More on This Story

Thanks for your post. One other thing is when you are advertising your property alone, one
of the concerns you need to be aware of upfront is just how to deal with household
inspection accounts. As a FSBO owner, the key to successfully shifting
your property along with saving money on real estate agent commissions is awareness.
The more you understand, the better your home sales effort is going to
be. One area where by this is particularly
essential is inspection reports.

I have learn several just right stuff here. Definitely value bookmarking for revisiting.
I surprise how a lot effort you set to make this type of magnificent
informative web site.